Here is the homily from our Good Friday service.

This past Sunday we looked up at Jesus as he rode into Jerusalem on a donkey to the cheers of the crowds. Last night on Maundy Thursday we looked down on him as he washed our feet in humble service, as he left us a new commandment and new ways of seeing love. Today, again, we look up at Jesus, this time nailed to the cross.

We’ve just heard John’s account of the last days of Jesus’ life and in case you’ve not read John’s gospel, it’s not an easy text to dig into. It’s mystical and philosophical and Jesus in this gospel is both the pre-Easter and post-Easter Jesus at the same time so it can be really difficult to relate to this Jesus in the ways we do in the other gospels. It makes the whole gospel rich and heady and powerful, and the passion narrative is particularly thick with meaning and symbolism, so instead of trying to do the impossible and unpack the whole of John’s account, I’d like to focus on a few scenes that I’ve been thinking about this Holy Week.

Jesus seems to stage direct the whole thing. When the Roman and Judean police come to arrest him, they fell to the ground when he says “I am he,” a reference to the great “I AM”, the name of God from the Exodus stories. Jesus consistently refers to himself with a series of “I am” statements in John’s gospel, I am the true bread, I am the way, the truth, and the life, I am the vine, I am the good shepherd. But this is the only occurrence where those who hear him say it fall down before him. These guards, soldiers, and police hear the words “I AM” that so many others have heard Jesus say in his ministry and they acknowledge and fall. Others, including Jesus’ closest disciples, have heard the “I AM” and stood fast, but these Roman pagans and Judean police who are here to take Jesus by force are the first to recognize the power in this statement. And It causes me to wonder if I’ll let my armies fall to the ground before the I AM today.

Peter gets a bad rap for not admitting that he knew Jesus. But I can’t fault him for not wanting to die. He was a fisher by trade who never quite figured out this whole Jesus movement thing to begin with. He followed a compelling teacher who had new and amazing things to say about the God he knew and loved so much, but following a teacher and openly rebelling against Roman rule and the Temple authorities are two very different things. It’s dangerous to look at your culture and the people around you, people you love and have cared for and say, “Maybe there is a better way? Maybe our hope isn’t in violence and blood-shed, always being right, but instead in a love that builds bridges instead of barriers?” It causes me to wonder if I’m willing to love the world so much that I’ll not condemn it, but rather to work with Jesus to try to save it today.

“Now Barabbas was a bandit.” But we chose the bandit. This moment passes by rather quickly in John’s account. In the other gospels, there is loads of information about who Barabbas was and what he did. But here it is a simple calling “Not this man, but Barabbas!” His name, Barabbas in Aramaic means “son of a father” much like our Jesus. And much like our Jesus he offers a path of salvation. The word bandit here means a violent insurrectionist. Barabbas represents the overthrow of Rome with the sword. But Jesus says to Pilate’s face, “My kingdom is not from this world.” My kingdom is not made from the same stuff as yours, with bodies piled high and built on the backs of slaves. He tells Peter to put away his sword. It’s not by the sword that his kingdom comes, but it is through washed feet and mended hearts and opened eyes. It causes me to wonder if I’ll be choosing Barabbas or Jesus today. 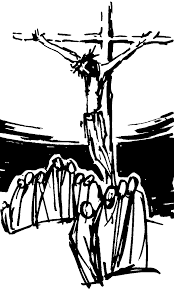 At the end, when Jesus knew that everything was finished, he gives up his spirit. I won’t lie to you. This is the hardest part for me to hear and to experience every Good Friday. I prefer the Jesus from the other gospels who is screaming in anguish with me, who knows the pain I’m in when I feel like God has abandoned me. I prefer the Jesus who can hold me in his arms and let me cry myself to sleep when the hurt and the brokenness of the world gets to be too much and I prefer to hear Jesus yell with his last breath, “Eloi! Eloi! Lema sabachthani!” But that isn’t the Jesus we get today. Today we get the Jesus who, in his great love and compassion for us, holds our hand as we walk through the valley of the shadow of death, all the way to the end. This is the Jesus who is so confident in where he’s going and where he’s been that he can’t feel abandoned and refuses to let us feel forsaken because he will always be with us. “It is finished,” he says. He can’t take away the pain, but he won’t abandon us in it either. It causes me to wonder if I will follow his example, and walk with the people God has given me all the way to the end with love and compassion today.

It’s tempting to write today off as just a commemoration of a nice man who did some nice things. It’s tempting to jump over today and get straight to the celebration tomorrow night. But the truth is that we live in the now-but-not-yet. There are so many places in this world where the innocent are sacrificed to the gods of this world, where collaborators seek their own glory and stability instead of seeking first God’s kingdom and its justice. There will be time enough tomorrow and for the next fifty days after for celebration. For today though, let’s make sure we’re here. Let’s make sure that we are present in the midst of the suffering. Let’s make sure we work to bring to fulfillment the plan of salvation that leads through the cross and doesn’t just end at it. Were you there? Were we there together as God’s family?

View all posts by St Augustine's at UK Chaplain